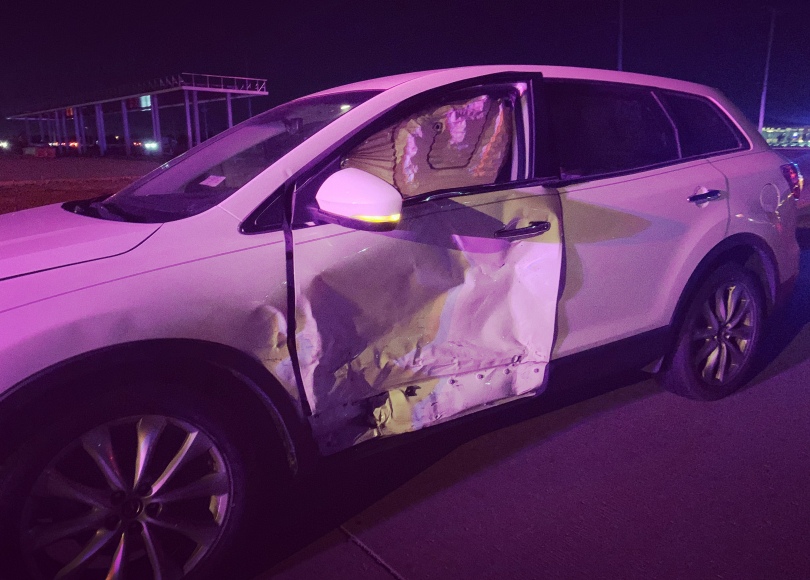 We were heading to dinner, ready to try a new place, new for us. A place called Kwan’s Kitchen was calling, and we were ready for a chance to unwind before the holiday weekend.

As we headed down Memorial Road, past Rockwell Avenue, in Oklahoma City. I was daydreaming into the distance. Like usual. And, no, I wasn’t driving.

Kristi was, and I suddenly heard her scream.

We had been hit and hit hard in the intersection of Memorial and Rockwell. Kristi somehow managed to wrest control of the vehicle and keep us from flipping. I was 90 percent sure we were headed down the embankment and maybe onto the Kilpatrick Turnpike below.

As the person in the passenger seat, I’d describe it is being on a really bumpy boat ride on the lake. The vehicle was just thrusting about, and the morning after, I was quite sore — more sore than after I finished my half marathons. By a lot. Some of that was compounded by achy hips from a golf outing earlier in the week.

I got out of the vehicle instantly and urged Kristi to get out. See, I watched too many Emergency!-like shows in the 1970s, and I knew that the car always exploded in the aftermath of a wreck.

Right as I was walking toward the other driver, to whom I was going to ask, “What the ****?,” a gentleman walked up to me and gave me his name and number. He and his wife had seen the whole thing. The other dude ran a red light, a light that had been red for quite a while.

We’re not sure how fast the guy was going, but I immediately got concerned for him and walked up to him, not in anger, but just to make sure he was OK. He was extraordinarily apologetic, which made me immediately conciliatory, and I stood with him as his teenage daughters got out of their Honda Odyssey. For the record, we think he was going 30-40 mph through the intersection.

What struck me is how hard the hit was. It was really hard. Two airbags went off, both on Kristi’s side of the car, and she whacked her head. The hit was so hard, it popped the gear shift out of place in the middle of the front of the vehicle. The hit was so hard that it BENT MY SUBARU FORESTER CAR KEY.

I shit you not. The key must have been against something in my left pocket, but the impact bent it. We got it fixed pretty easily with WD-40 and duct tape, which is how you do it in the South.

If you weren’t a believer in seat belts before, you became one.

If you weren’t a believer in staying hands-free with any device before, you were now.

Oklahoma City Police came out to help, and while they were helpful, I would also note that they’re short. No time for any extra commentary or questions. All business, and that’s understandable and standard. I add that as a word to the wise if you’re ever in an accident: minimize the number of words you speak and maximize their impact.

“Ma’am, do you want an ambulance?” the officer asked Kristi.

“I’m not asking you,” the officer said.

My response emanated from the brief conversation I had with the witness, who (it turns out) is a former police officer. He said, “Have the ambulance come over and check you out, even if you don’t think you need it.”

When you’re in an accident, your body automatically goes into fight-or-flight, meaning the adrenaline is at the max, and while you’d be likely to feel a broken bone, you’re less likely to feel what they call “soft-tissue injuries.” In this case, Kristi had sustained a nasty bump to the head. The paramedics checked her out and held her for a couple minutes for high blood pressure that quickly went down.

We’re both pretty sore today. I’d say that I’m much more sore than I expected to be. Achy like the flu.

“I’ll be fine. Don’t bother the doctor or paramedic!”

In the hard, cold, real world, that just translates to, “not really hurt,” even if that’s not true.

It’s enough to make a person pretty jaded — or get that law degree and chase a few ambulances!

However, we’re lucky. We lived. No broken bones. A big pain in the ass, figuratively and literally, but aside from some paperwork and administrative headaches the next few weeks, all good.

And the other guy and his family lived. And he has insurance, too. Thank the good Lord. I can’t tell you how little sympathy I have for anybody who’s driving without insurance. Driving is a privilege, not a right.

Later over dinner, watching the Thunder game, I told Kristi, “Hey, it was another first for us. Our first car wreck together.”

“How romantic,” she responded.

We both agreed though: we’ll never forget this Thanksgiving! It could have been oh, so much worse.