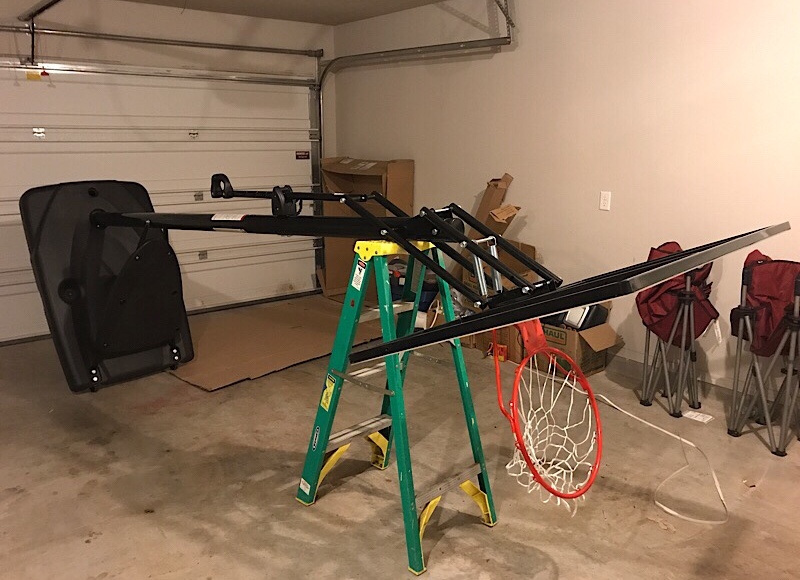 We only got it all put together a couple of weeks ago.

It’s the Spalding Angled 54″ Portable Acrylic Basketball Hoop, and Kristi got it at Academy for her daughter. It’s one of those presents that’s for the kiddo but that the adults (namely, me) will use from time to time. Or a lot.

And by all accounts, it’s a fantastic little hoop for your driveway. 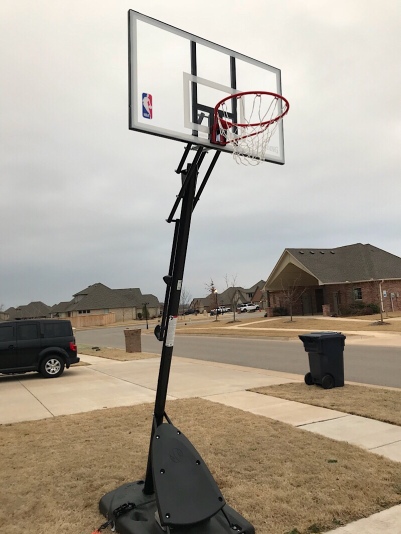 However, I have two major pieces of advice for you if you get this: Have somebody else put it together, and weigh it down, especially if you live in a windy place like Oklahoma. By my estimation, it took 20-30 hours to put the hoop together, complicated by the fact that I ended up making multiple trips to Home Depot, the first of which was for nuts and bolts that fit properly, the second of which was to buy two ground anchors and a ratchet strap to hold it down. The nuts and bolts included in the Spalding system mostly fit correctly, but there were a couple of exceptions.

The assembly documentation was awful. Dreadful. If you decide that you’re insane enough to put this together yourself, you’ll want to watch YouTube videos, especially this guy’s:

I don’t know who David Battle is, but he deserves a Nobel Peace Prize for this video. I pretty much, maybe literally, love this man. He’s what YouTube is all about: he documented his work, and he has provided value to more than 168,000 people who are asking themselves,”Why the **** did I decide to put this thing together myself?”

He single-handedly kept me from pulling out all my gray hairs starting in late December. While the work only lasted 20-30 hours, it took us longer to finish this project over time mostly because we went through several deep freezes here in Oklahoma and then several wildfire-inducing windy days. I wasn’t going to torture myself in 19-degree weather or a 40-mph headwind trying to finish this SOB.

Battle assembled his Spalding hoop himself (and did it barefoot!). However, he noted in the video that it’s better to have two people. I’d say unless you’re really strong and coordinated, you have to have two people as well as a mid-sized ladder or sawhorse on which to balance the hoop assembly while you’re working on it.

It started out simply enough. The base is pretty easy to put together, and with a little help to angle it just right, the pole fits in nicely. The kickback board didn’t come with enough nuts or bolts, but I had all but one, so I don’t think I’m going to lose the kickback board on that account.

The tough part of this assembly is the neck and backboard, and when I say “tough,” I should note: we got it done. This is not an impossible task, but I watched the above video and deciphered Spalding’s documentation repeatedly before I did each step. What I’d say is this: it’s way harder than it had to be. If only Spalding’s instructions were worth a hoot.

The hoop cost $225 after tax, but at $50 per billable hour, it cost more than $1,000 when accounting for time. Part of me considered invoicing Spalding for my time, but in retrospect, I got a blog post out of it.

Kidding aside, we finally stood this puppy up, and it was hunched over — so, I went back to YouTube and watched as many Spalding-related videos I could find to look at different angles of the setup to see what I did wrong, and I went back to Battle’s video and figured it out. I had a couple of the brackets in the wrong hole.

Fixed that and stood it up. Woo hoo! We can play basketball. Right?

Well, in Oklahoma, during late February and early March, the winds start to kick up at 40-50 mph, and I quickly realized that a severe storm beyond a garden variety boomer was going to knock this hoop over or pick it up altogether. For what it’s worth, we did put the wet cement or sand or whatever that mess is into the bottom of the base.

That base is not going to hold it down in Oklahoma: I promise you.

So, I went back to YouTube and found this video from another Dave, Dave O.

Brilliant! Two ground anchors and a ratchet strap. After watching the video, I immediately sprinted to Home Depot and asked the good man to find me these wares. Then I installed them before dark and kept shooting.

I even added a cinder block.

And I realized…I hadn’t tightened my nuts nearly enough. In fact, one bolt came off completely, although I don’t know whether it was a Spalding original or one of the scab replacements I bought from Home Depot. So, Kristi bailed me out and called a local hoop installer, who came out and tightened our work up for FREE! Left his card just in case Kristi needed any other repair or construction work done.

Think his name was Coby Sharp with CSS Custom Designs. I didn’t get to meet him, but what a smart move to do that for somebody. Good dude.

As of St. Patty’s Day night, the goal only stands 7-feet tall, but it’s perfect height for Kristi’s daughter to shoot.

And it’s perfect height for me to dunk!

And I’ve provided you with a little bit of value: Forget the Spalding documentation. Watch the two videos in this post, and you’ll be fine.