There’s nothing better than a cold beer and a good book, so I thought I’d write a blog post about both. I’ll call it three beers and three books.

I mostly stay in my lane as far as beers go. I like Sam Adams, Bass, Newcastle, Moose Drool and Guinness Draught. Those are my go-tos. During the summer, I would add Pacifico, Yuengling, Stella Artois, Shiner Ruby Redbird and Leinenkugel’s Weiss beers to the mix. That routine can get old, however.

So, periodically, I go to the aisle where you can buy single beers, and then I start picking freely. I force myself to get out of my comfort zone a little, and that can result in some serendipitous finds. Here are three I’ve tried recently:

1. Willy Vanilly from the Alpine Beer Company. I love vanilla, so I figured I’d probably love this — and I do like it. It was a bit sweet for my beer taste, but it’s as close to a truly excellent vanilla beer as I’ve tasted. I remember it being mildly carbonated with a nice collar.

Would I buy it again? I liked it but didn’t immediately fall in love with it. I wouldn’t turn it down if offered to me but probably wouldn’t pursue it otherwise.

2. Redhook Blackhook Porter. I prefer dark beers with hints of coffee, chocolate, maple and, heck, if they made it, bacon. I like beers that keep you warm and that pair well with a Miles Davis record. That’s about as metaphorical as I get writing about beer. However, in the spirit of something more like a Guinness, an Irish dry stout, or a Moose Drool, which is a brown ale, the Redhook Blackhook maintains its own very well. The one noticable difference — and I consider it an upgrade — is the hint of coffee when sipping. Really nice.

Would I buy it again? Definitely. This beer has a chance to make the rotation, especially when summer turns to fall, which in Oklahoma is December. Kidding aside, I really liked the Redhook Blackhook Porter, and it symbolizes the reason why I force myself to try new beers: It’s the best way to stumble upon something terrific.

3. Rahr & Sons USS Fort Worth – American Session Ale. This beer was way out of my comfort zone. First of all, it was in a can, which means it’s automatically something I’d pass on normally. However, the design on the can was so over-the-top that I was intrigued by what this beer could be, and for me, it was a tale of two halves.

At first, the beer was off-putting like a much-to-hoppy IPA. Other beer critics refer to its citrus flavor, and I got that as well midway through. By the end of the pour, I had rather grown to like it. It was better in the second half than the first.

Would I buy it again? I might. This is more of a ‘hot day’ on the front porch after mowing the lawn sort of beer. However, the can’s design is kind of awesome, and I’m intrigued by drinking something named for a battleship with the motto “Grit and Tenacity” atop the can. And I like Texas, especially Cowtown.

That takes care of the beers. So, what about the books? I’ve been reading roughly a book every month or so, although I’m not sure it’s even that much. I’d love to read a book a week and most often don’t believe anybody who says they read that much, presupposing they do anything besides read. Alas, I’ll tell you about one book I’ve recently read, one book I’m currently reading and one that I intend to buy very soon.

First, I finished Brene Brown’s “Daring Greatly” several weeks ago. I like Brene. She’s from Texas, and she self identifies as maybe a little bit loud and brash and strong-headed. She hooked me at “Texan.” However, only parts of this book appealed to me at the outset given that I’m not a parent. I’m also not touchy-feely at all. Ick. But I wanted to learn more about vulnerability and how it can benefit a person, especially professionally.

What I was pleasantly surprised to learn was that this book wasn’t about being touchy-feely and learning to overshare. It was very much about being out there and being thoughtful, however.

I don’t memorize books, so once I’ve read something, I allow some of the big concepts to stick with me and then I lose the rest on purpose. I only have so much room in my brain. Here’s what I took from “Daring Greatly:”

1. Brene quotes Teddy Roosevelt at the beginning of the book, his remarks about the arena. “It is not the critic who counts…” However, this quote reminds me of Kool & The Gang’s masterpiece “Get Down On It.” Feel free to laugh although I think you’ll acknowledge my point. In that song, J.T. Taylor sings, “How you gonna do it if you really don’t want to dance by standing on the wall?”

This is essentially the Teddy Roosevelt quote personified in an early-1980s pop-disco hit. The credit goes to the person who gets out there and dances it even if it turns out to look like Elaine from Seinfeld.

And what I take from all of this, relative to the book, is that introversion is no excuse for emotional isolation and that, if one will allow themselves the opportunity to push the envelope personally, it will pay dividends. People are way more willing to open up to you if you will open up to them, in due time, of course.

3. Vulnerability and the workplace. The three professional concepts I really internalized from this book are the negative effect of non-communication, the negative impact of blaming in situations where a result was less than optimal and the positive benefit of showing weakness, which to me means acknowledging sometimes that you don’t know, don’t understand, or aren’t sure.

The book I’m reading presently is Gary Vaynerchuk’s “Jab, Jab, Jab, Right Hook: How to Tell Your Story in a Noisy Social World.” I’ve been a fan of Gary’s for a long time because I think he’s genuine and that he’s right. He’s been right before about many things in the digital content world, and because of that track record, I trust what he says pretty assuredly. 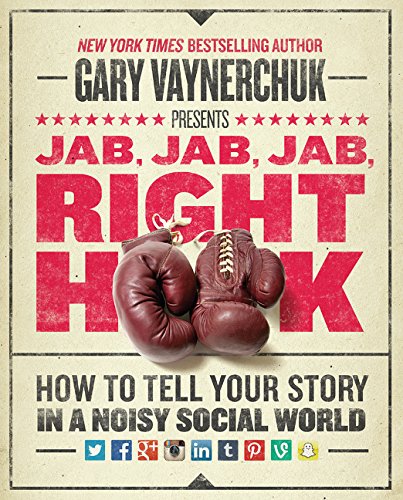 This book is four years old, but the concept is super simple for businesses: Create content that informs and entertains without selling. That’s tough for us business folk to do, but the idea is to create value for the end reader each and every time so that when you do need to sell, you’ll have their attention.

That’s the thing about the digital world: we’re all competing for attention. News stations and companies with social channels and personal bloggers are all competing with Netflix and my blog and a good book and the desire to go to the pub or to take a bath. As consumers, we latch on to content that moves us, and we’re pretty agnostic as to where it comes from. All we’re doing as brands is hoping for a piece of that, a sliver of your attention with the unsaid quid pro quo that we earn your attention when we really need it.

This book is the guide on how to make that happen.

And last but not least, the book I want to read next is called, “Messy: The Power of Disorder to Transform Our Lives” by Tim Harford. One of my favorite Sirius XM channels is called Business Radio on SiriusXM 111. They recently had a program called, “Your Summer Reading List,” and Harford talked about the power of chaos to fuel productivity and creativity.

It’s not so much that spending all your time perfecting your environment takes away from the time to do amazing things. It’s that overemphasizing order in all parts of our lives belies a rigidity that ensures we’ll never achieve anything great, and even if that isn’t the goal, it will certainly rob us of wonderful experiences and moments.

And in an ironic twist, that’s the end of this blog post because I need to go clean house. Have a great rest of your weekend.