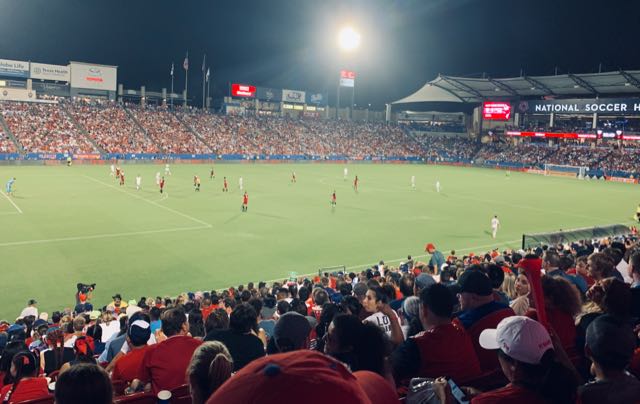 It was toward the end of the OU-Texas game a few weeks back. I declared on Twitter that sports were the biggest waste of time on the planet, a sentiment my 12-year-old stepdaughter would agree with wholeheartedly. I had just spent nearly five hours watching a game unfold on TV featuring a team I rooted for because of birth, locale and education.

I didn’t really choose the Oklahoma Sooners as much as they chose me.

It’s not like I’m going to start rooting for another college team with the same fervor that I do the ‘Boomer Sooners.’ If I could pick any college team based on any number of factors, I’d probably choose Penn State because of their wonderful home unis, or maybe North Texas because of its relative proximity and jazz program.

Coastal Carolina or South Alabama might be schools I’d consider given my love of South Carolina and the Mobile – Gulf Shores area. I already root for UCLA as it’s the team of my wife’s family. I love the Bruins’ home unis and home stadium, which I visited a couple of years ago for a Bruins game. I could totally see myself as a Cali kind of fan: Just there for the beautiful Pasadena sunset.

I also root for Army, not just because it’s a part of the world where my wife grew up but also because I admire the discipline required to play football for the Black Knights and how hard they play. These are young men I can get behind. Plus, as an admirer of tradition, I figure one has to get behind either Army or Navy — and I picked the team that had been whupped a whole bunch of years in a row when I picked.

Mostly I root for teams who have people I can root for, teams who have a story that inspires me, teams whose cities I like, teams whose unis I dig and, most important, teams that have an online community that I can connect with in a way that helps me build some friends within the fandom. It’s more fun to root for a team when you have lots of people you can cheer with or with whom you can commiserate.

When I was growing up, I just rooted for whoever was near. That included the Dallas Cowboys, whose games I watched every week from the age of 8 until I was 30. Every week. There was a period of time when Staubach was quarterback that I didn’t understand that the Pittsburgh Steelers and New York Giants had actual fans. I thought everything was a Harlem Globetrotters-Washington Generals setup. Heck, I’m not sure that I understood that sometimes Dallas lost games. I don’t recall ever seeing it until the mid-80s.

My first baseball love was the Los Angeles Dodgers, the result of the 1977-78 World Series matchups with the Yanks. By the time 1980 came around, the Royals started to get most of the play in the Tulsa area. And then the Cardinals. And by the time Fox Sports Southwest came around, I rooted for the Texas Rangers, and sometimes I root for the Mets and A’s and Giants and Nats and Padres and Blue Jays and anybody but the Yankees and then even the Yankees.

I can be all over the place. I know. I break all the sports rooting rules.

But until a few years ago, I was the sports embodiment of the U2 classic, “I Still Haven’t Found What I’m Looking For.”

In the world of baseball, I’m a Rangers man all the way despite the fact that I am very discouraged by the direction of the team and its ownership. But I’ve felt more connected to the Dodgers than any organization recently because of my family’s love of the club (my wife is an L.A. girl) plus the fact that the Dodgers’ Triple A ball team is in Oklahoma City. Plus, Dodger Stadium is a million times cooler than the new, sterile Globe Life Park. Maybe a visit to the new digs in Arlington will change my mind.

Notice that I didn’t even mention L.A.’s World Series title. That was fun, of course.

Honorable mention goes to the Padres and Royals, the former because of a visit my wife and I took to Petco Park a couple years ago, in addition to my love of their new brown unis. Petco Park’s employees are the friendliest I’ve encountered, and San Diego really is heaven on Earth.

Kansas City is a life-long favorite, too. The stadium. Those fountains.

I grew up a Dallas Cowboys fan, and I still am a Dallas fan despite my prodigal ways. Ever since Baker Mayfield was drafted by Cleveland, I’ve been a Browns man — and I’ve connected with that community strongly. Lots of Twitter friends, and Cleveland’s daily coverage on YouTube / sports radio is fantastic. I want to see that through.

But I sure watched that Pittsburgh-Dallas game Sunday like a guy who was watching his first love and missed them. I even turned out all the lights and mentally pretended it was Summerall and Madden calling the game, taking me back to 1985.

Dallas is horrible, btw. It’s not like I’m bandwagoning. Not this time at least. I once started rooting for the L.A. Clippers because I needed a West Coast team to root for due to my work schedule. I picked the worst of them all, the Clip Show. And I watched every game for a full season with the great Ralph Lawler on the mic.

Honorable mention teams: Arizona Cardinals because of Kyler and Larry Fitzgerald. And I like the Phoenix area. I also like the Chiefs, and I’m trying to root for the Jaguars of my future retirement home city, Jacksonville.

I grew up rooting for the Celtics. It’s just how it was back in the 80s. You either rooted for Boston or the Lakers, and I was a Bird guy. Then the Dallas Mavericks came around, and by 1988, they were in the Western Conference Finals.

In 1994-95, I lived in the Houston area, so you’d better believe I rooted for the Rockets.

And of course there’s the Oklahoma City Thunder, my hometown and home state team. Two years ago on our honeymoon, Kristi and I were in Toronto at a sports bar awaiting the Thunder-Portland game. It was the playoffs, baby! We got a seat but had to watch the Raptors game first with all those Raptors fans. And I knew Toronto’s NBA history — not pretty in the playoffs.

And then Kawhi happened. That was a run that made me fall in love with the Raptors team. The winning had less to do with it than the fact that I started rooting for them and they came through for me with a championship. I had a hunch they were going to beat Milwaukee and Golden State, a team of destiny, and I started telling people that only to get laughed at — and then they won. As an Oklahoma Sooners football fan especially, I’ve come to fall quite easily for any team that can just win the big game. The BIG BIG game. The Raptors did it, and they did it with role players and hustle, and Kyle Lowry who is hardly any taller than I am. Plus, the Raptors are the most international team in basketball. At one point during their run, they had like four languages represented on the court.

So, my main basketball teams are the Raptors and Thunder, but I try to root for the Mavericks still, when I can.

The Dallas Stars won the Stanley Cup in 1999, but I started watching them immediately upon their arrival in Texas from Minnesota. Without knowing a thing about hockey, I started watching Ralph Strangis and Darryl Reaugh, and by 1998, I had the hang of icing and power plays and offsides and five-hole and all that.

“Put the biscuit in the basket!”

But then the strike of 2004 happened, and I stopped watching. When the NHL returned, it felt gimmicky and unnecessarily high-scoring.

Dallas made the playoffs a few times, but nothing captured my sports spirit until this year when the Stars made it to the Stanley Cup Finals. In between 1999 and this past season, I tried to get into the Nashville Predators, whose city I love and whose unis and color scheme I dig. Because of my love of all-things Toronto, I tried to start rooting for the Maple Leafs.

It just wasn’t there. Dallas is my team.

I should note: it also helps if I can travel to see the team every once in a while. The Oklahoma Sooners and Oklahoma City Thunder are easy, and so is any team in Dallas. But a trip to see the Dodgers or Bruins in L.A. isn’t out of the question, nor is a trip (post-COVID) to Cleveland to root on the Browns.

And then there’s soccer and the team that prompted me to write this self-indulgent post: DC United.

Their season ended this weekend with no trip to the playoffs, and it got me feeling sentimental for a club I’ve come to really love. My soccer interests started with rooting for Tottenham Hotspur some decade ago when Gareth Bale was the star. I had liked their kits, and I had taken this online quiz from Bill Simmons about who I should root for in the EPL, and both my gut and the quiz told me I was a Spurs man.

The thing that has kept me from being fanatical about Spurs is that not every one of their matches is on TV here in the States. Being able to truly follow the team is a must for my fandom. Suggestion for the Oklahoma City Dodgers: Every game should be televised. It will grow your gate. I know it seems counter-productive, but trust me.

MLS isn’t EPL by any stretch, but it’s still fun to watch. I just needed a club to follow. Upon their existence, Portland was a consideration. The Timbers wore green. The Sounders were kind of neon, which I liked. Sporting Kansas City is relatively close, and FC Dallas is very close with a beautiful facility in Frisco.

The Manchester United legend signed with DC United, and my allegiance was drawn to the men in black (and red). Rooney’s play and level of hustle, to me, was inspirational although it should be noted that the fire he brought to the club two years ago faded away relatively quickly. He and his family shuffled back across the pond.

But I stuck with DC United, largely due to the friends I had made on Twitter. My buddy Doug, and content creators like Sarah Kallassy. The podcast called RFK Refugees Podcast became a staple of my listening — and a good, well-informed podcast I found is crucial to my fandom enjoyment. In fact, the ingredients for fandom, for me, are:

So, with all that said, here are my current sports rankings of who I root for, rankings that will definitely change over time except for No. 1.