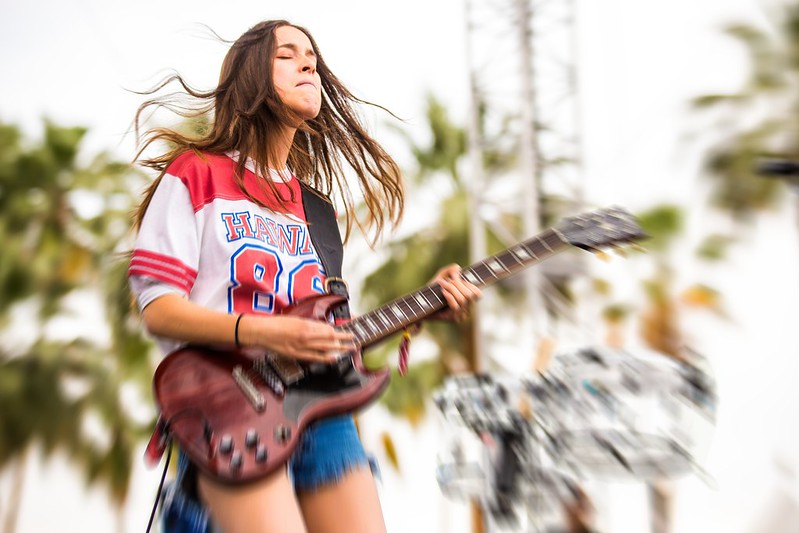 The first time I saw this trio, it was on Saturday Night Live. I don’t recall what the song was or what it sounded like, just that I didn’t care for it, as in really didn’t like it. As in, what the heck was that? And who are they?

Did Hanson have sisters who started a band?

However, I’ve done a total 180 over the years on “Haim,” pronounced HY-uhm, and I couldn’t wait to hear tracks from their newest album, “Women In Music, Part III,” released June 26.

They’re only getting better. And they’re already very good.

If you’ve never given Haim a serious listen, do so already, especially if you’re a musician. They’re music-geek ear candy.

“Want You Back” got me hooked three years ago:

They’ve been compared to Fleetwood Mac, but Haim reminds me a lot of a 90s indie band called Luscious Jackson with their grooves, hooks and neo-hippie vibes. On their newest album, they’re really delivering the indie-pop soul vibe, complete with elements of 90s soul in the tune “3AM,” my favorite track on their new release.

But “Women In Music, Part III” opens with “Los Angeles,” an ode to the sisters’ hometown, invoking a bit of Sublime, in as much as they’ve competently executed a bit of 90s pop reggae.

“The Steps” definitely has that Fleetwood Mac vibe all the critics allude to (that guitar!), but it also has a Sheryl Crow feel with a heavy dose of empowerment:

Nice tight hook from track 3, “I Know Alone,” also known as the social-distancing dance choreo video per one of the video’s pithy commenters on YouTube. Oh, and the vocals + production on the bridge are fantastic, somewhere between Imogen Heap and Billie Eilish (starts at 2:05):

The song, “Gasoline,” was better live and with the piano riff in the chorus and bridge, featured here:

Haim only has a few videos done for the album, shortened to WIMPIII by all the cool kids. One of them is for “Don’t Wanna,” which features Este, Danielle and Alana walking through the parking lot at The Forum in Inglewood, Calif., and then running. In fact, if you’ve ever watched Haim’s videos before, you know that walking is kind of their thing. Like they invented it.

Running is like the next step for them, ha!

What I particularly appreciate with this group is how well-produced they are, and never overly so. For example, “Another Try,” just has enough production. I couldn’t imagine it having any more nor any less. And it’s another track whose bridge-into-final-chorus is worth the full listen. There are a ton of songs you’ll listen to, and you get to the second chorus and you’re done. You’ve heard what you needed to hear.

That’s never the case with Haim. They compel you to listen through the bridge.

Back to the Mac references, though, and it’s hard not to hear Stevie and Lindsey in “Leaning On You.” It wasn’t the only influence heard by listeners, however. One YouTube commenter compared the guitar work mid-song to Paul Simon’s “Graceland.”

And back to the Sheryl Crow vibes on “I’ve Been Down:”

“Man From The Magazine” feels very much like a real-life experience, the story of an obnoxious reporter and, by the second verse, a patronizing music store proprietor.

I didn’t love every track on the CD. For example, “Up From A Dream,” was a pretty quick flip-the-switch track for me. And by the time you get to tracks 12-13, “All That Ever Mattered” and “FUBT,” I was less enthused although I suspect the latter is going to grow on me long-term.

But then the sisters close strong with three bonus tracks, the first of which is “Now I’m In It,” a song about returning to one’s old self or taking a bad situation by the reins.

Between the Robyn-esque production and the video, I felt like I was watching an old episode of “Girls” by the end of it.

When I noted that the album closes especially strong, take the second-to-last track, “Hallelujah.” I don’t know if I was anticipating another Leonard Cohen redux, but it was a very nice surprise. I hadn’t mentioned it yet, but a lot of the vocals in this track remind me of another indie group I like, “The Belle Brigade.” If you’ve never heard of “The Belle Brigade,” for the love of everything indie pop, check them out.

Anyway, don’t be surprised if this “Hallelujah” becomes an anthem unto itself, to sisterhood and friendship.

Last track on WIMPIII is “Summer Girl,” and all I can say is: Somebody’s been listening to Lou Reed. This is a worthy cap on Haim’s latest project — and, again, the best stuff comes through during the bridge-to-last-chorus:

Peer around the corner at you
From over my shoulder I need you
I need you to understand
These are the earthquake drills that we ran
Under the freeway overpasses
The tears behind your dark sunglasses
The fears inside your heart as deep as gashes
You walk beside me, not behind me
Feel my unconditional love

Best line of the album, saved for last. Might be the best track, too.

Photo at the top of this blog post is from a photographer named Thomas Hawk. You can find the photo here and then his Flickr account here!

And if you dig album reviews and video list-posts like this, let me know. I’ll do more of them!