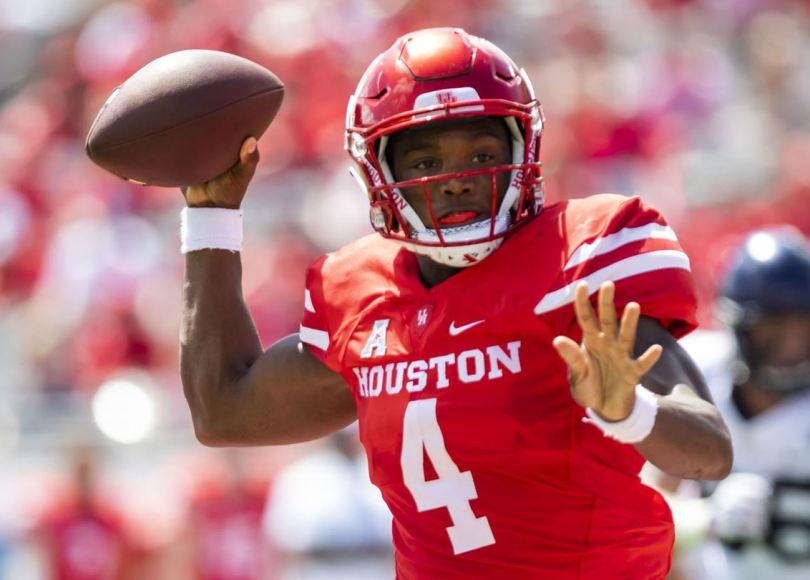 The Oklahoma Sooners named Jalen Hurts starting quarterback on Monday in breaking news that nobody doubted. The Alabama graduate transfer was a shoo-in for the job, it seemed, over the underrated Tanner Mordecai and the future superstar Spencer Rattler.

Hurts has played in three national championship games and helped the Crimson Tide win the 2017 natty.

But come September 1, Hurts might not be the best QB on Owen Field.

D’Eriq King is coming to town, and he’s got a Dana Holgorsen offense in tow.

Everybody who thinks that Week 1 versus the University of Houston is going to be a cakewalk is grossly mistaken. New defensive coordinator Alex Grinch and the Sooners D will get a stiff test in Week 1 against a proven offensive system and a QB who has a puncher’s chance at a Heisman Trophy in 2019.

King was leading the nation in touchdowns last November when a torn meniscus sidelined him for the rest of the year.

The website underdogdynasty.com, which covers football in Conference USA, the Sun Belt, the AAC and Independent college football, ranks D’Eriq King as its No. 1 player in the AAC.

They write:
We’ve said it for a while and we’ll say it again: D’Eriq King is the best player in this conference, no question. He was robbed for Conference Player of the Year last year, and deserves more respect from all of college football.

King was one of three players to account for 50 or more touchdowns last year. He did that in 11 games, and might have led all of college football in touchdowns if he didn’t get hurt. Dana Holgorsen’s staff gives him yet another playbook, but that won’t slow him down at all. Holgorsen said he won’t run King as much this year, so his passing numbers should improve. Regardless of what happens, King’s talent is too good to ignore, and we need to give him the respect he deserves.

Check out this pass. This is the type of stuff that killed the Sooners time and time again the past few years, especially against teams that had taller receivers (think Texas and Iowa State):

D'Eriq King QB Houston makes a great throw towards the pylon, his WR gives him a enough room to put the ball where he can go up and make a play! @DeriqKing_ @UHouston pic.twitter.com/OQq9pfUa4Z

Let’s check the roster. I’ve got some good news, Oklahoma. Houston doesn’t have any upper-classmen taller than 6’2″ and their one 6’3″ receiver is a freshman.

But to be brutally honest, this YouTube video should scare the devil out of Oklahoma fans. King is a fantastic passer, and Sooners fans know darned well that Oklahoma’s defense of the past two seasons wasn’t really any better than any of the teams you just watched in that video.

There are zero guarantees Oklahoma wins Game 1. The battle versus Houston in Norman on Sept. 1 is basically a Big 12 game from the past couple of years. Winning is surely expected, but by no means should anybody fail to understand how big a test this really is.

So, while Monday was all about getting the Jalen Hurts-as-starter news out of the way for the Sooners, OU fans should be getting to know D’Eriq King.

Dude could be the stuff of Oklahoma’s nightmares come Sept. 1.