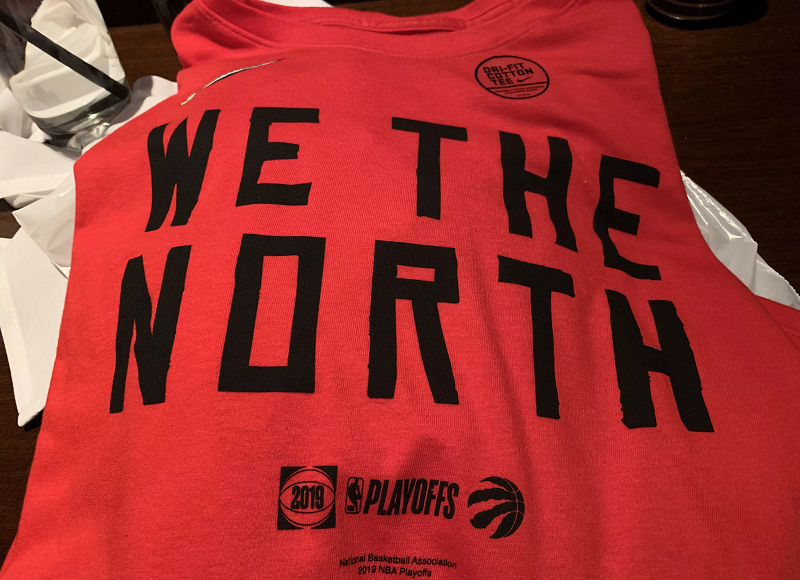 My first out-of-town date with Kristi was a Texas Rangers game against the visiting Toronto Blue Jays, a team I had grown to despise thanks to Jose Bautista. Drew Stubbs walked it off with a homer in extras, and the Rangers had exacted at least one morsel of revenge.

The very next day, Rougned Odor won the hearts of every Rangers fan but obliterating the jaw of Bautista after a dirty slide. In the long-term, it wasn’t an effective move but in the short-term it sure felt good. Kristi and I attended the game before because, I thought, the fracas might happen THAT night, and I wasn’t going to mind being there to witness it.

Does that make me an awful human? Lol.

Sports have been a big part of our adventures the past three years, and we made it a part of our honeymoon, too.

And thus explains why I have fallen completely nuts for the Toronto Raptors.

Our honeymoon started in Buffalo, where we rented a car and drove to Niagara Falls. Much more on that later, but we went from there to Hamilton, Ontario, where Kristi graciously allowed me to stop at Tim Horton’s Stadium, home of the mighty Tiger-Cats. We spent all of about five minutes there. This is something I do. I like to see arenas and stadiums.

But then it was on to Toronto and Montreal.

I’m going to write about our experiences in each city, which is very different from the other. In fact, I got the sense talking to locals in each city that they didn’t like the other. I guess it’s the equivalent of Oklahoma’s OKC-Tulsa rivalry or Texas’ Dallas-Houston.

However, today I explain my fascination for these Raptors and why I’m all-in on #WeTheNorth.

Even before we tied the knot, Kristi and I had made it a plan to spend one evening at a bar watching the Raptors during our honeymoon. It also happened to be a night when the Oklahoma City Thunder were playing Portland, a series they lost. Sad trombone. But we wanted to be strangers in a strange land.

And the Raptors had lost the first game of their series, too, to Orlando, just two nights before. In the eyes of Raptors fans, that first-game-of-the-first-series loss had to be discouraging given all the years their hopes had been lifted only to have them sunk.

After two days of wandering the streets of Toronto and taking in a Blue Jays game, we wandered toward Scotiabank Arena and the legendary Jurrasic Park area for fans. I say legendary because it’s gotten a lot of TV time during the playoffs and because I remember Oklahoma City’s own Thunder Alley.

The vibes were similar albeit Toronto’s is way bigger. And a much cooler name.

Also, this is something you should know about Toronto, Ontario. It’s the fourth-largest city in North America, behind Mexico City, New York City and Los Angeles. It’s clean and sort of European. Definitely cosmopolitan. Gray. Cool.

On game night, we walked into a bar right by Scotiabank Arena called Real Sports Bar. It was a giant sports bar with at least 100 TVs, and I was sure given our lack of a reservation that we wouldn’t be able to get a seat for Game 2 between the Toronto Raptors and the Orlando Magic.

I was wearing an Oklahoma City Dodgers cap. Representing the 405.

The host took us to two good seats right behind the main seating area but in perfect view of all the screens. Not only were the Raptors playing but so were the Blue Jays, who took second-fiddle this night. The Maple Leafs played the night before, otherwise I’m not sure we would have been watching the Raptors.

We asked her if we could watch the Oklahoma City Thunder game after the Raptors’, and she asked if we were from Oklahoma City.

“We are,” I said. “But tonight we wanted to come hang out with Raptors and root on Toronto,” not yet having any emotional investment in the team.

Besides Kawhi Leonard, Kyle Lowry, Marc Gasol and Serge Ibaka, I knew nothing about this team. They were pieces put together without much of an on-the-floor theme, in my opinion. Nevertheless, my declaration was met with an extraordinarily welcoming, “We are glad you’re here. Tonight you’re Raptors!”

The two seats to our left were soon taken by two diminutive Asian women who were rabid Raptors fans. I couldn’t get a sense of whether English was their primary language when they asked us if the seats were taken. They weren’t, and we sat next to them for the entire game. I mention them to provide observational evidence of Toronto’s diversity in basketball. When the Raptors-Warriors series starts on Thursday, please look at the faces of Toronto’s fans.

The team’s president, Masai Ujiri, is a 48-year-old Nigerian who’s best known right now for his gamble on a one-year deal for Kawhi Leonard but who is most respected in the basketball community for his ambassadorship of basketball in Africa. In many ways, the Toronto Raptors are the future of professional basketball both on and off the floor — extraordinarily international.

At the bar, Kristi and I ordered some food, some drinks and just observed. I ran across the bar to a sports apparel shop at halftime to get myself a We The North long-sleeved t-shirt. I ran back for the second half. Toronto won in anti-climatic fashion.

And I didn’t think much about them until we got back from our honeymoon. Truly, I spent more time rooting on the Maple Leafs while in Canada because I knew how much hockey meant to the city compared to anything else. And, oh how the Maple Leafs are long-suffering, not having touched Lord Stanley’s Cup since 1967.

Once we got back to Oklahoma City, with the Maple Leafs eliminated, I made it a point to tune in to the Raptors-76ers series.

And I got to learn about Cameroonian Pascal Siakam. And I got to watch former Thunder player Serge Ibaka and former Grizzly Marc Gasol. The three of them together speak Spanish and French on the floor, which I love.

Freddie Van Vleet plays for the Raptors. I was a huge Wichita State fan when he and Ron Baker were together. Loved those teams.

I saw first-hand why Kyle Lowry is the heart-and-soul of the team.

And I (and the world) discovered the meme-factory that is Nick Nurse. That man paid his dues. At one point he made $300 a week coaching for the Oklahoma Storm, a USBL team from Enid, Oklahoma. He’s living the North-American dream.

You know who else is? Nav Bhatia, a 67-year-old Canadian immigrant who’s attended every Raptors game since 1995. Everybody talks about Drake, but Bhatia is the real superfan of this team, and if you have an extra three minutes, read his story. It’s incredible.

But just as I was getting to know the team, Game 7 against Philadelphia happened, and I knew I was going to be sad if their run ended because, symbolically, it would also close out what was a logical memory extension of our honeymoon.

And then Kawhi’s shot bounced and bounced and bounced, and bounced, and went in. Now, if I told you that I had a premonition of that shot before it happened, you wouldn’t believe me and that’s ok. I didn’t even tell my wife. The premonition was merely that the Raptors were going to win on a long shot that bounced around the rim and went in. The thought lasted about one full second. I didn’t really have time even to communicate it before it happened. But I swear to you that it’s true.

It doesn’t even matter. It went in. Kristi screamed. I high-fived her, and 10-year-old Olivia ran in faux-fear, not understanding what all the hullabaloo was about.

Like it or not, at least for this playoff run, these Raptors were ours.

The Bucks series felt like a long-shot by most accounts, especially after two games.

Then Nick Nurse put Kawhi on Giannis, and the Raptors invented The Wall. Kyle Lowry had his monster game. And then Fred Van Vleet had an even bigger game after the birth of his child.

And then 26-3 happened in Game 6. In the 6ix, which is what Toronto calls itself.

At some point, you start thinking the Raptors are darlings of destiny.

Given everything I’ve seen — Kawhi’s shot, the emergence of Nick Nurse, Jurassic Park, The Wall, what Kyle Lowry and Freddie Van Vleet can do when they get hot — it’s hard not to think the Toronto Raptors are simply starring in a feel-good movie.

And despite not knowing whether Kawhi will come back to Toronto after his one season there, I can’t guarantee that I won’t always root for this team, at least a little. Maybe not if they’re playing the Thunder, of course.

Then again, we don’t yet know just how good, how dramatic these NBA Finals will be.

How does this movie end?

If it’s up to me, it’s Raptors in 7. Kawhi is MVP, and this time the game-winner is all net.