Everybody should have three or four dishes they can whip up from memory. They don’t have to be fancy. In fact, this time of year, comfort food rules the roost, and for me that means soups.

For most folks, potato soup is a thick, creamy delight. However, I learned a much less Southern version of this winter-time classic. I’ve always called it Yankee Potato Soup because I got it from my mother, who is from Ohio. I love this version of potato soup because it’s fast, inexpensive, wholesome and delicious.

As my mom has always said, “This will cure what ails you,” and I had the flu this past week. I can attest to the truthfulness of her statement!

Total preparation time is 40 minutes from start to eats.

Here’s what you need:

Here’s how easy this is. Peel and chop the potatoes into chunks, roughly 10-15 per potato. Toss in the carrots, and chop the celery. Slice a quarter of that onion into small chunks, as fine as possible. For the record, I prefer bigger chunks of onion. Onion is a flavor maker. Love me some onion.

Toss it in a pot and cover it with water.

That whole process will take you 15 minutes.

Turn the stove on all the way up and get it to a rolling boil, where it should stay for 25 minutes. At that point, add a cup of milk, 2 TBSP of butter and up to a quarter cup of cream. 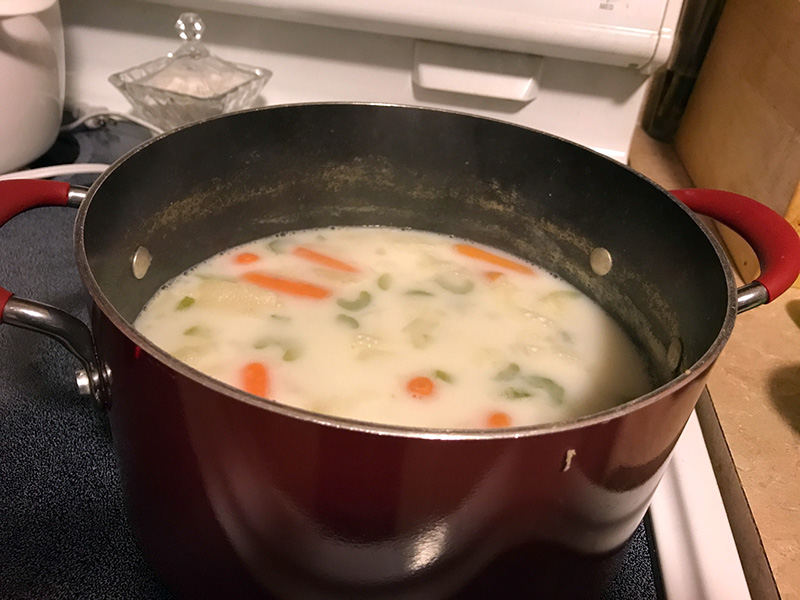 Add salt and pepper to taste, and you’ve got soup! Pair with a small salad for Night 1:

And on Night 2, kick it with some saltines on the side and a glass of sweet tea.