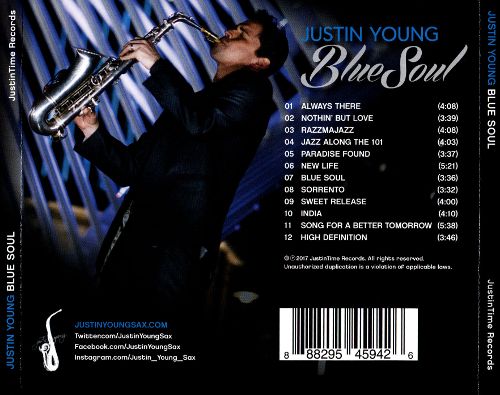 But if you enjoy contemporary jazz or smooth jazz and haven’t given saxophonist Justin Young a listen, do yourself a favor and check out his new album, “Blue Soul.” You’ll get to hear three tunes I wrote as well.

Justin is currently based in Seattle, but I got to know him when he and his wife, Rachel, lived in Oklahoma City. She and I worked together at a TV station in town (not the one where I currently work). As soon as I found out that Rachel’s husband played sax, I sought out his music and was blown away — not only by his technical skill but also by his sound, which I found quite compatible with mine. When I write instrumentals, it’s often with a sax lead in mind, and I usually have had players like Dave Koz, Jeff Kashiwa, Steve Cole and many more in mind.

I immediately started combing through all my recordings in hopes of putting together a demo CD for him. The hope was that, maybe, someday, he might record one or two of them. It turned out that he liked many of them, and he and his dad hooked me up with recording equipment to start writing more, some of which you can hear on my SoundCloud channel.

That was an incredible opportunity for me because it allowed me to learn Logic Pro. I got pretty good at it, although I’m not a Mac guy and will probably have to start over with FL Studio soon on my new laptop.

Justin went into the studio, and I knew that he might use one or two of my tunes, but I didn’t know which ones. He ended up picking three, and was pleasantly surprised by two of the three he picked. The one I knew he’d pick was called “Sweet Release,” a tune I first put together about 15 years ago. He did an amazing job with it.

The first version here is the track I put together in Logic Pro, not the original original of this song that I did back in 2003. But I still kind of liked what I did. This was after only a week of tinkering around in Logic.

But then Justin killed it on the album version. Yowsa:

The first of the two tracks that surprised me was a song he ended up calling “Razzmajazz.” I called it “Moment of Indecision” when I wrote it 18 years ago. I’ll put my original up first and then his, and you can see just how much he and his team of musicians and producers livened it up. Wonderful job.

And then the third track he included on the album is the title track, “Blue Soul,” a song I called “Night Things” when I originally put it together in 2000 or so. I wasn’t expecting this one to get picked, but Justin heard something in this composition and again blew it away on the album.

My version of “Night Things” here:

And then what Justin did as he turned it into “Blue Soul.” Amazing.

If you see this post, do me a favor and go follow him on Facebook or pay him a visit at justinyoungsax.com. If you happen to have Sirius XM, you can also hear Justin on Ch. 66, Watercolors.