Of all the places I’ve traveled to in the past decade, no place has surprised me as much as Pittsburgh.

I picked the Steel City three years ago as a baseball destination, a vacation to end the summer. I had never been to Pennsylvania, and I think I was fascinated by the city having watched Steelers games over the years and a few WTAE newscasts as part of my employment with Hearst Television. Plus, a friend of mine is from Pittsburgh, and I had heard a lot about the city from her over the years.

I’ll blog about my other Pittsburgh experiences soon, including a visit to Primanti Bros., the Western Pennsylvania Sports Museum, the Andy Warhol Museum and a trip up Duquesne Incline.

However, for now, I present to you PNC Park. 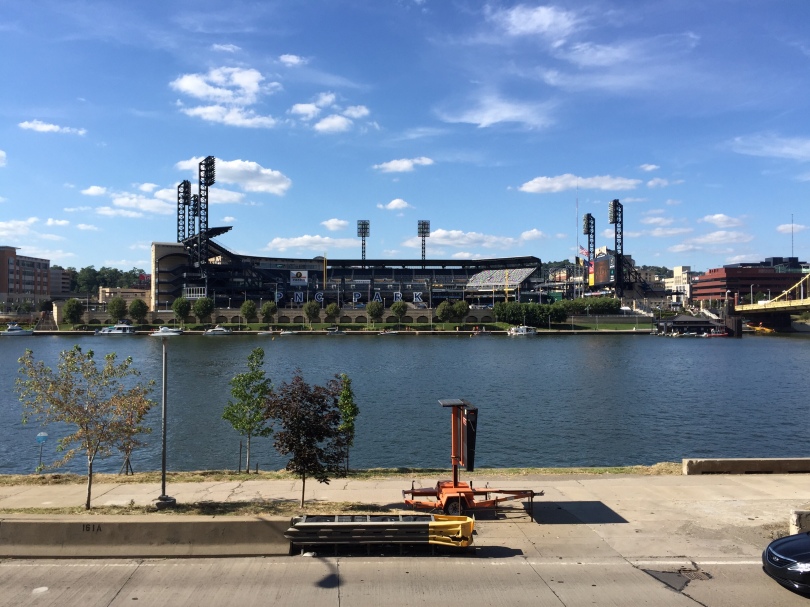 First of all, I knew it was going to be a good day when I was able to negotiate a deal for an all-day parking spot. There was this shaded parking area under a bridge, and it was supposed to be $15 through 6 p.m. and extra for Pirates parking, but I got there by lunch time and told the attendant my situation: I’m a tourist coming to see Pittsburgh, and it’s my intention to be downtown all day, eat at local establishments, root on the Pirates and take a crap ton of photos.

He told me to enjoy my stay in Pittsburgh and gave me the stub that would cover me through the Pirates game.

My first stop was Mullen’s Bar & Grill. I picked it because it was pretty big and had lots of TVs tuned to sports. It was noon, and I was on vacation, so of course I had a beer with lunch. 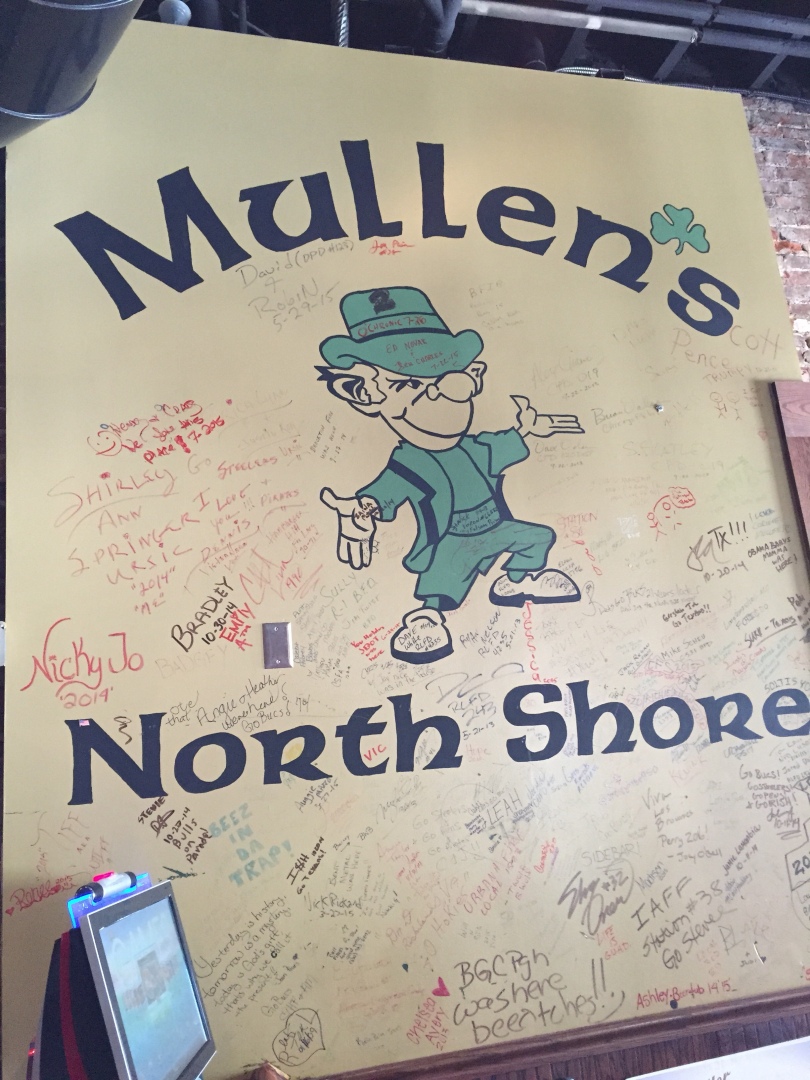 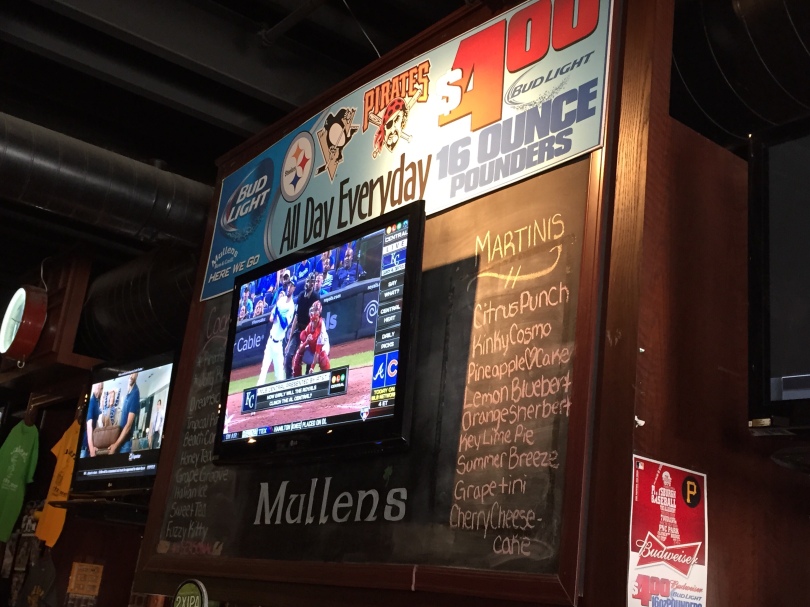 But I didn’t have just any beer.

I had a Yuengling, my first. Yuengling is a Pennsylvania institution.

My taste buds sensed the strong carbonation and robust flavor and were sent to beer heaven. I hate to describe it this way, in 2018, but it tasted like a manly beer. Drinking it made me want to chop wood and work on my car.

Mullen’s is within a couple blocks of the ballpark, and I noticed that the district was already busy with people, early in the afternoon. Mostly it was business people going to lunch, but the party atmosphere at PNC Park ramped up quite early, rocking and rolling by 3 or 4 p.m.

I spent a good chunk of the afternoon at the Andy Warhol museum, which didn’t allow cameras. Of all the artists whose legacy would support allowing randos to take photos and video of their work, it would have been Andy. He would have turned that video into art. I think it’s crazy that museums don’t encourage photos and videos. Crazy.

Alas, I didn’t know that much about Warhol going in and came out of it feeling like I had learned a lot and also understanding why he was such a vital modern artist. Highly recommend a visit, even though I have zero evidence as to why it was awesome. I’ll just say this: he was a beautifully weird, interesting cat. And he loved Pittsburgh.

Enough “culture.” Lol. Pittsburgh surprises many visitors in how significant its art scene is. This article from the Washington Post details the city’s public art scene.

In terms of cool factor, the only city that has compared with Pittsburgh, for me, was San Francisco. This is a strong segue back into sports because AT&T Park (Giants) is my favorite baseball park in America, and PNC is a very close second.

PNC Park is connected to downtown Pittsburgh by bridges sitting over the Three Rivers of Pittsburgh — the Allegheny, the Monongahela and the Ohio. There’s one bridge that everybody walks on to get from downtown to the park, a pedestrian pilgrimage unlike any other in sports. It’s named for one of the greatest humanitarians in sports history: Roberto Clemente.

Clemente died on Dec. 31, 1972, in a plane crash that should have never happened. The plane was overloaded and run by a super shady company. Clemente was headed to Nicaragua to help ensure that food donations were making it to the people who needed it there after a deadly earthquake.

You can’t go to Pittsburgh and go to a Pirates game and not honor Clemente.

So, by this time it’s 4 p.m., and happy hour is already cranked up to ‘We Are Family’ levels across the blocks that surround the Pirates’ baseball cathedral. Hours after I tried my first Yuengling, I was sipping my first Leinenkugel (“Berry Weiss”), people watching and looking for deals from Pittsburgh vendors. 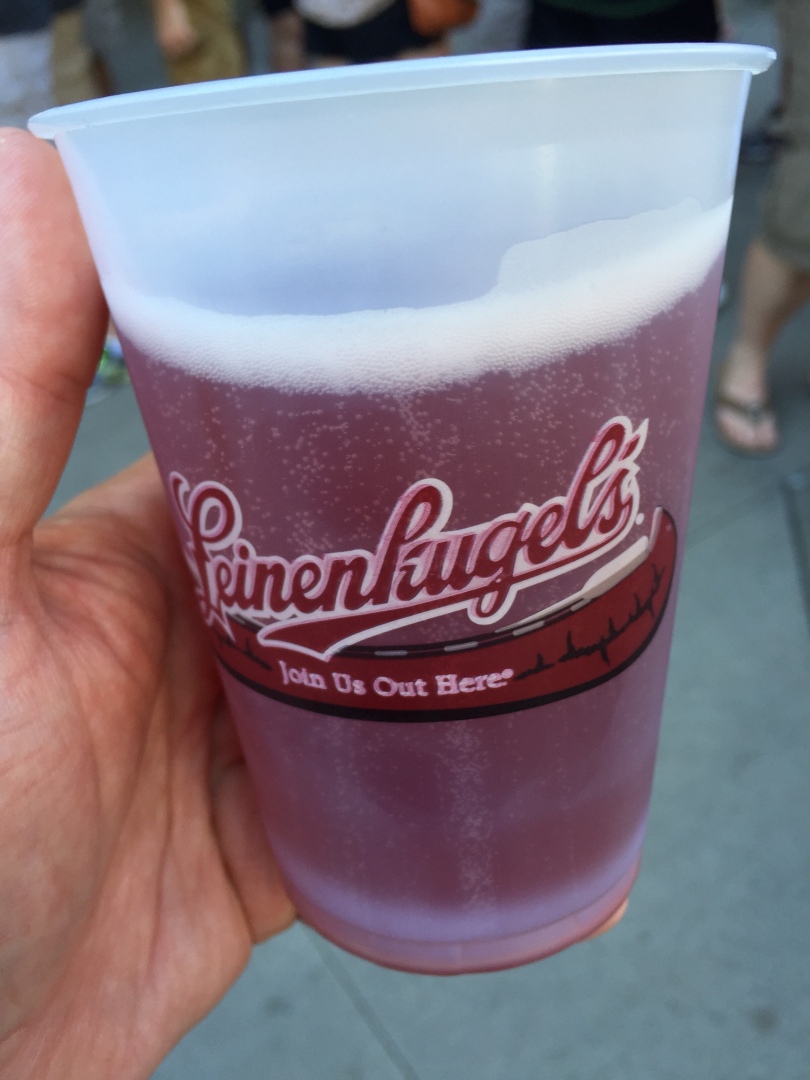 And then I heard a cover band playing some INXS.

OK, that didn’t catch my attention as much as did this guy, who I presume is probably a banker or an accountant letting loose for the weekend. He was nice and toasty and dancing his ass off.

Fast forward to 7 p.m. and the march into PNC Park. My seats for the Friday night contest were behind home plate and high up, my favorite vantage point for watching a baseball game.

I sat next to a 60-some-odd-year-old woman and her crew and had my first pierogi.

Overrated. Don’t get it.

It’s a dumpling, a Polish ravioli.

Don’t @ me. When I visited Camden Yards the next year, my food treat was kettle chips with some kind of creamy crab cake concoction on top. There is no comparison between the two.

But I needed to try a pierogi, and I did and it was underwhelming.

The park and familial atmosphere of PNC Park was not underwhelming, however. It was fantastic. I felt like I was rooting on a local high school team. The fans were nice. Everybody describes St. Louis Cardinals fans as being the ultimate in nice, but I would submit to you that they haven’t visited Pittsburgh. Pirates fans, at least the mid-2010s variety, were friendly without the cockiness.

And this Pirates club was 72-47 to begin the weekend homestand. They were a contender.

Bumgarner and the Giants won the first game, 6-4. For my second game, a Saturday afternoon tilt for national TV, I sat right behind home plate down low. I could see the dust and chalk pop from the catcher’s mitt each time Gerrit Cole rocketed a fastball down the middle.

And instead of sitting by a friendly older lady, I was sitting next to the guy I’ll call the “old sea captain.”

He looked a little like Howard Schnellenberger. He smelled of cigars and sin.

And he told baseball stories from days gone by, so many and with such detail that I wouldn’t doubt it if he turned out to have been a former Major Leaguer. The Saturday game blazed by pretty quickly, a pitcher’s duel highlighted by seven really strong innings from Cole.

A wild pitch in the top of the eighth helped San Francisco even the score at 2-2, and then all was quiet until the bottom of the ninth when with two outs, Starling Marte decided to start the ‘Marte Party’ (pronounced mart-AY part-AY) a little bit early.

And then the Pirates raised the Jolly Roger to indicate a win.

I haven’t been to all the baseball cathedrals in this great land, but there has been none better in terms of atmosphere, location, beauty, architecture and fun than PNC Park.

If only the team could be better more consistently.