Before that were the Kansas City Royals, the result of weird TV rules in Oklahoma during the early 1980s where more Royals games were shown on Muskogee television than were Cardinals games.

Hated the Cardinals. Always have. Unfairly so given that I love St. Louis and really enjoyed the new Busch Stadium on my visit four years ago. The 2011 World Series didn’t help.

Now it’s the Cubs I kind of loathe. I’d even root for the Cardinals.

But where it all started for me in baseball was with the Yankees and Dodgers, the Celtics-Lakers of its era, the 1970s. New York had Ron Guidry and Reggie Jackson and Thurman Munson and Graig Nettles, Roy White, Willie Randolph, Brian Doyle and more.

And the Dodgers had Garvey-Lopes-Russell-Cey, the most recognizable infield of the 1970s. It seemed, at least it did to a 7-year-old, that one was either a Yankees fan or a Dodgers fan. The choice was easy for me.

New York’s uniforms were drab: gray and black (to a 7-year-old, there was no difference between dark navy and black). But Los Angeles’ uniforms were bright and clean: white with blue lettering and red front-side numbers.

There was no choice, and my first baseball love was born: the Dodgers.

Make no mistake: At the age of 47, I’m set in stone as a diehard Texas Rangers fan. I’ve been that way since the late 80s. They’re my team, and despite their recent taste of success, they have caused me great consternation over the past several years. Given their absence from the 2017 playoffs, I needed to root for somebody, so I picked the Dodgers.

Truth is: I picked the Dodgers at the beginning of the year to win the World Series…over the Astros. My pick is looking pretty good right now, isn’t it?

But do you know what else looks great? Dodger Stadium. It’s the third-oldest stadium in Major League Baseball, behind Fenway and Wrigley — and for those who love mid-century modern design, this stadium is really kind of perfect. It was built in 1962 and to an outsider like me, it sure looks like it’s stuck in the 1960s.

Not that this is a bad thing, architecturally. And not that I’ve ever been.

I’ve visited a lot of ballparks, many of them over the past few years. I’d certainly like to make it to L.A. for a game in 2018 (as World Champs), but I just haven’t made it out there yet. In fact, I’ve never been to Los Angeles.

That needs to change.

Until it does, I’m sharing some pics from Game 1 of the 2017 NLDS between the Los Angeles Dodgers and the Arizona Diamondbacks. These photos were taken by my girlfriend’s aunt’s friend Robbie McGraw. See if you can follow along with that!

Did you know that even the coloring of the seats in Dodger Stadium is purposeful? When the seats were replaced in 2006, owner Frank McCourt returned them to their original colors of sky blue, yellow and orange. One was a reminder of the bright blue sky in California, while the yellow represents sandy beaches and the orange California’s bright sun. 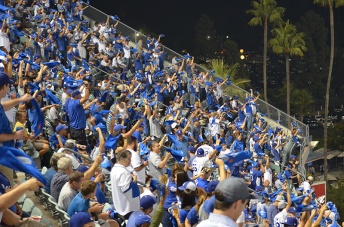 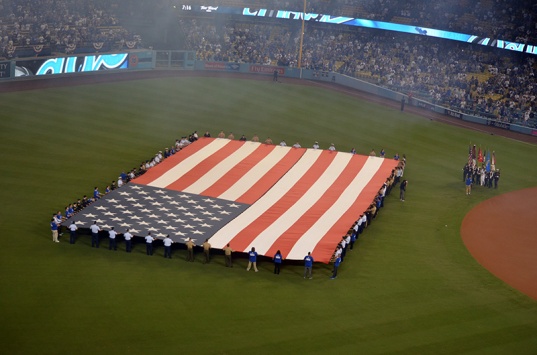 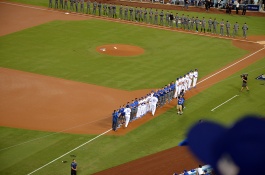 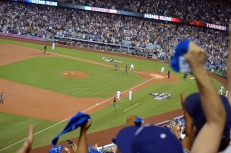 Enjoy the pics. Hope to make Dodger Stadium one of my next baseball park visits.